We all know the story of Christmas, and joys of this  wonderful time of year to be with family and friends.  But think beyond our modern customs . . .  reflect on  “The Twelve Days of Christmas” 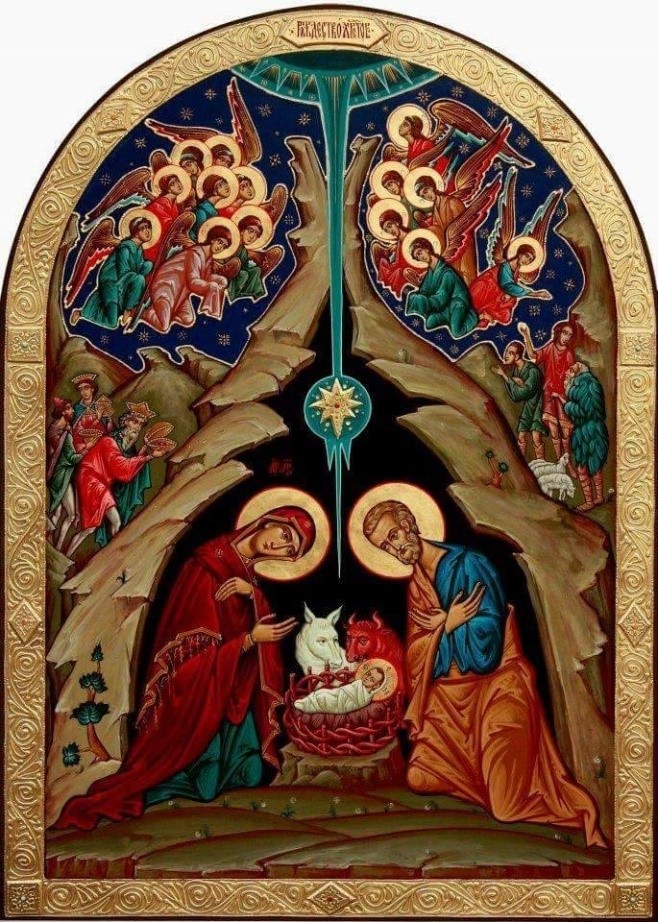 The birth of Christ and His baptism ought never to be divorced. Both events define the Christmas season. It imparts to the Christian the knowledge that Christ’s coming into the world and Christ’s sanctification of the waters makes our new life possible — a sonship by adoption accomplished through baptism.

The Twelve Days of Christmas are a festive period linking together two Great Feasts of the Lord: Nativity and Theophany.

Days 1-3: The Nativity of Christ is a three day celebration: the formal title of the first day is “The Nativity According to the Flesh of our Lord, God and Saviour Jesus Christ”, and celebrates not only the Nativity of Jesus, but also the Adoration of the Shepherds of Bethlehem and the arrival of the Maji; the second day is referred to as the “Synaxis of the Theotokos”, and commemorates the role of the Virgin Mary in the Incarnation; the third day is known as the “Third Day of the Nativity”, and is also the feast day of the Protodeacon and Protomartyr Saint Stephen.

Day 5:  29 December is the Orthodox Feast of the Holy Innocents.

The Saturday following the Nativity is commemorated by special readings from the Epistle (1 Tim 6:11-16) and Gospel (Matt 12:15-21) during the Divine Liturgy. The Sunday after Nativity has its own liturgical commemoration in honour of “The Righteous Ones: Joseph the Betrothed, David the King and James the Brother of the Lord”.

Day 9:  2 January begins the Forefeast of the Theophany.

Day 12: The Eve of the Theophany (5 January) is a day of strict fasting, follows the same general outline as Christmas Eve. That morning is the celebration of the Royal Hours and then the Divine Liturgy of Saint Basil combined with Vespers, at the conclusion of which is celebrated the Great Blessing of Waters, in commemoration of the Baptism of Jesus in the Jordan River.  According to Orthodox theology, the steps that Jesus took into the Jordan River were the first steps on the way to the Cross. That night the All-Night Vigil is served for the Feast of the Theophany.

We warmly welcome you to join us in worship of the Holy Trinity. Whether you are an Orthodox Christian, or if this will be your first visit to an Orthodox Church that preserves Ancient Christianity as handed down from the Apostles, we are pleased to have you with us. St. Jacob is a community of believers from all walks of life seeking Salvation through the Gospel of Jesus Christ.

Please feel free to contact me about our Orthodox Christian Worship, Spirituality, Doctrine & History, or other questions regarding the parish, schedule, and access:
Fr. Damian Kuolt
text or call: 602.418.2982
office: 541.668.7682 frdamiank@outlook.com

All are welcome to Divine Services, fellowship, and adult education. If you are unable to attend in person, you may join us for our 10AM Sunday Worship via YouTube: https://bit.ly/2Paoqdm

Check back often as we update weekly services, activities, and classes as we celebrate the seasons of the year.

Use ZELLE...
...and 100% of your donation will go to St. Jacob, for the purpose you choose.
If you cannot, we also can recieve via PayPal